My 365 Project for 2013 is to practice EVERY SINGLE DAY. I’ll chronicle my adventure here on the blog, through my YouTube channel, and through various social outlets such as Instagram/Flickr, Facebook and Twitter.

I’m pretty excited about this project even though I know it will be difficult! I can’t wait to see how much my playing changes over the next year.

I hope you’ll join me on my journey! If you’re doing a 365 project this next year, I’d love to hear what it is! 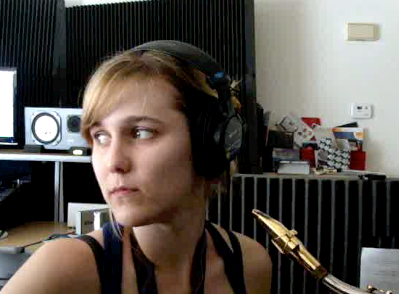 Last year I gave myself 6 resolutions to work towards and I can gladly say that I accomplished five out of the six. I had a few big ones on the list and hopefully I can maintain the momentum into the New Year. I’ve also upped the ante by adding a few more resolutions this year. You can read the original post here on my foreign language learning blog.  Anyone want to take a guess as to which I let slide? Haha.

So, this year I figured I would post my resolutions again. It helps keep me accountable and is a great way to reflect on the year. Here are my 2013 New Year’s Resolutions.

1. This year I’d like to finish another project whether it’s another one of my own or the collaboration idea that’s been discussed. It doesn’t have to be a full album, but it needs to at least be an EP.

2. Release a few singles. I have had a few ideas of releases and I’d like to get them all done. I have plans for about four singles.

3. I think that it’s really important to find the time to exercise more regularly. My exercise schedule is pretty irregular, so I’d like to make more time for it this year.

4. I hope Teen Jazz continues to grow the way that it has over the past few months. Ideally I’d like traffic to the site to be twice what it is today.

5. Be able to have basic conversations in language #5. I’m not sure if I announced what language I’d be studying this year, but I’m finally going to do share which language it will be… and it’s… Croatian! I had initially decided to study Russian this year, but my heart just wasn’t in it. Croatian is closer to my heart (my grandfather and my beau-fils) so I’m more motivated to learn it. Learning a language is already difficult enough without having to force yourself on top of it all.

6. Write a couple more eBooks. I recently wrote my first eBook for Teen Jazz and I’d like to write a few more.

7. Do the one thing I’ve been dreading for quite some time now… Fix my teeth. I’ve had braces but I stopped wearing my retainers and so they’ve moved and quite a bit. I’m going to take care of that this year.

9. Cross at least one thing off my bucket list. More if I can.

10. And last but not least, I’m going to steal one from my goal list: Do something I’ve never done before. I know this sounds vague, but it’s really easy to fall into a routine. I’d like to try to do at least one thing I’ve never done whether that’s traveling to a new place, trying new food, a new activity, etc.

What are your goals for the new year?

The 12 Deals of Christmas at Teen Jazz are all available for just under 24 hours more! Treat yourself, or your friends, during the holidays with one of these great offers.

Here’s a recap of what’s available:

2. 60-70% off band instruments including flutes, trumpets or clarinets from USA Educator

3. 50% off a Professionall written bio or press release from All Music Review

4. 2 CDs for the price of 1 from Teen Jazz Host Shannon Kennedy

6. 50% off hard rubber or plastic mouthpieces for saxophone or clarinet

As part of Teen Jazz’s 12 Deals of Christmas, I put together a little something special. Earlier in the year, I posted a template that I had created for keeping track of the album recording process and I received a few comments about it being a good idea. I also have a few other templates that I’ve put together that I thought might be useful, so I assembled them along with advice for putting together an album in this eBook.

This book is mainly for those working on their first album, but it might be useful for you even if you’re on your second, third or fourth! According to producer and recording artist, U-Nam,  “I’ve been using one of the great templates ( it’s a recording checklist ) that has been included in the book. I’m telling [you that they are] really useful and this is for everyone that doing…

As part of today’s deal, you can download “Carol of the Bells Medley” from my album Almost That Time of Year for FREE. Just enter your email to get the link sent to you.

Get your FREE Christmas Song here.

For today’s deal, Teen Jazz has teamed up with two talented photographers located in Southern California to offer 25% off professional photoshoots for you or your band.

The photo shoot package includes an 1 hour time slot and 20 edited digital images on a DVD for a discounted cost of $100 (normally $400 for 3 hours). Photo shoots will be located in Long Beach, CA with Kimmy Simpson or South Orange County with Kim Daniels. You are responsible for your own transportation costs.

Today’s deal is 50% off either plastic or hard rubber mouthpieces for clarinet and alto sax. Tenor sax mouthpieces are already sold out!

Looking for the perfect stocking stuffer?

Today’s offer at Teen Jazz is 2 CDs for the price of 1. Buy a signed CD for a friend and get one for yourself FREE! CDs make great stocking stuffers and holiday gifts, so be sure to take advantage of this offer while it’s still available! The offer is only through Teen Jazz and Shannon Kennedy’s web site.

Hello everyone! I just wanted to let you know about today’s deal! For $50 (that’s 50% off the usual price), you can get a professionally written bio (for yourself, your band or a friend), album review OR press release from All Music Review.

I definitely endorse All Music Review’s work – my most recent bio and press releases have been written by them and I’ve already ordered a few through this deal for myself and friends.

New campaign on Teen Jazz! Get the perfect holiday gifts for yourself or the musicians in your life! Today’s deal is 30% off handcrafted wood guitar pick cases or reed cases for saxophone, oboe or clarinet.

This  year we’re trying something new at Teen Jazz. We’ve partnered up with a lot of great sponsors to offer deals on music products and services over the next 12 days for 24 hours each offer.  (Some of the services are also useful for those outside of music – or they make great gifts for your musician friends).

At 8am PST this morning, the first item launched – for the next 23 hours (since one hour has already passed) you can get 30% off handcrafted, wood reed cases or guitar pick cases from Kenkase Music.

These deals are exclusively available at Teen Jazz. Sign up for the mailing list to find out what each deal will be and take advantage of these great offers!